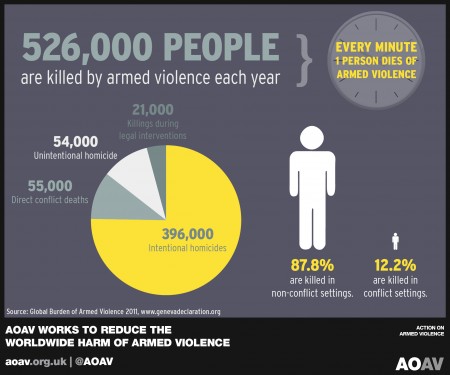 Action on Armed Violence (AOAV) has a central mission: to reduce harm and to rebuild lives affected by armed violence.

We do this by carrying out programmatic, research and advocacy work to reduce the incidence and impact of global armed violence.

The number of fatalities from armed violence is estimated to be over half a million people killed every year. Around two thirds of these violent deaths are estimated to occur outside conflict situations. Poorer countries are particularly badly affected.

AOAV’s global reporting on explosive violence is considered by many as the ‘main’ data set for such and is regularly quoted in both the media and at the highest levels of the United Nations. We have been running this project – which reports on explosive violence events listed in mainstream English Language media – since 2011.

AOAV uses a methodology adapted from an incident based methodology used by Landmine Action and Medact in 2009. Our data on explosive violence incidents is gathered from English-language media reports on the following factors: the date, time, and location of the incident; the number and circumstances of people killed and injured; the weapon type; the reported user and target; the detonation method and whether displacement or damage to the location was reported. AOAV does not attempt to comprehensively capture all incidents of explosive violence around the world but to serve as a useful indicator of the scale and pattern of harm.

Our data on the impact of explosive weapons in populated areas – where we record that over 90% of those reported killed or injured are civilians – not only forms the backbone of our advocacy and programmatic interventions but also is a central driver behind a civil society push to end the use of explosive weapons in towns and cities. The UN Secretary General (SG) regularly quotes our figures and they are often cited in leading UN reports, notably by UNOCHA, by Member States of the CCW and in the SG’s own report on the Protection of Civilians in conflict.

Our in-depth research extends to field-work that looks at the direct and reverberating impact of explosive weapons on civilian populations. In recent years we have conducted on-the-ground research in Yemen, Ukraine, the Syrian borders, the US, Pakistan, Lebanon and Israel/Gaza, to name a few.

First, we look at the ways to curb explosive violence use – such as monitoring the spread and supply of precursor materials for IEDs, or examining the trading flows of arms into conflict zones. We have produced a number of key reports on such matters in recent years. ‘Material Harm’ was an examination of the supply of component parts for IEDs; ‘A Tale of Two Cities’ was an investigation into the use of explosive weapons by US and UK forces in Iraq (in Fallujah and Basra respectively); ‘Under Fire’ was an in-depth examination of the shifting rules of engagement deployed by the Israeli military, with a focus on their actions in Operation Protective Edge in 2014; and ‘Air Power in Afghanistan’ showed how NATO responded positively to the threat to civilians by the use of air power in Afghanistan between 2008 and 2014.

Second, we examine the consequences of explosive weapons at the point of impact. This involves visiting epicentres of explosive violence and recording the wide area effects of such weapon use, with a focus on populated areas. This research is not only based on our work on the Explosive Violence Monitor, but extends to analytical reports. For example, we recently looked at 18 organisations who were collecting data on IED harm, with a case study from UNAMA in Afghanistan. We also recently conducted a systematic analysis of the wide area effects of explosive weapons in affected sites in Ukraine, Yemen and Syria/Jordan.

Third, we look at the reverberating impacts of explosive violence. This work encompasses many things, from detailed legal analyses of frameworks that offer support to victims of violence, to analyses of the long term psycho-social impacts of explosive violence on vulnerable populations. In the latter, our work ‘Anatomy of a Suicide Bomber’ examined the wider impacts of a market bombing in Pakistan, revealing the hidden impacts of suicide attacks on those directly and indirectly affected.

Our work is often cited by international media and other civil society and research organisations. As well as contributing to discussions in places such as Chatham House and Harvard Law Centre, AOAV strives to use its data and research to cause long-term political and social changes in the application of armed violence in civilian settings. To this end we campaign for imaginative responses to curb the spread of IEDs around the world, and aim to secure political commitments from states to refrain from using explosive weapons in populated areas.