AOAV has been working in the Great Lakes Region since 2011, implementing programmes with partners in Burundi and border communities of Eastern DRC. This regional approach to programming reflects the regional, cross-border dimensions of armed violence. Porous borders, shared cultural traditions and established cross-border economic trade, all contribute to strong links among communities on both sides of the Burundi-DRC border. In addition, porous borders allow the illicit cross-border trade of arms, ammunition and illicit goods such as minerals, and combatant groups to move relatively freely. 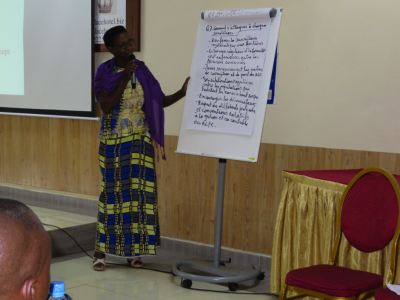 AOAV has conducted a participative study of Burundi-DRC border communities in order to inform evidence-based and innovative cross-border projects that tackle armed violence at the community level. In 2012, AOAV engaged survivors and affected communities, local and national organisations and international partners to conduct a participative study of armed violence. AOAV, CEDAC (an ex-combatant survivors’ network in Burundi), Vision GRAM (a local organisation in DRC), and international organisation Search For Common Ground (SFCG) partnered for an initial baseline study. Based on the outcomes of this participative research, AOAV and its partners developed guidelines and recommendations for longer-term interventions to address the needs and issues highlighted in the research. Following the baseline study, AOAV implemented community-cohesion activities with partners including tree planting and a concert.

In 2015, AOAV facilitated the establishment of a working group of government and civil society partners on both sides of the Burundi-DRC border to tackle the illicit trade of small arms and light weapons (SALW). A key partner in this work is the National Commission on Small Arms and Light Weapons in DRC (Commission nationale de contrôle des armes légères et de petit calibre et de prévention de la violence armée – CNC-ALPC). As a first step to tackling the problem, AOAV facilitated a border assessment of illicit SALW trafficking. The working group is developing an action plan to address the issues raised in the assessment.

Between 1996 and 2003, the DRC experienced two wars in which nine foreign armies and some 30 armed groups clashed on its territory. These wars led to the temporary partition of the country and the death of millions of people. Despite the agreement of the Sun City peace agreement in 2002, armed violence remains a serious issue in Eastern DRC. Armed groups are actively engaged in violence and proliferation of weapons is extremely high. AOAV’s September 2014 assessment of armed violence in the region found that violence is linked to armed groups. Poverty and unemployment are widespread and the reintegration of ex-combatants has faced many challenges. As a result, manipulation by politicians and warlords is common, using dynamics of ethnicities and land. Illegal weapon proliferation is high and access to firearms is easy and inexpensive. Violence including banditry, violent robberies and sexual violence are common. The majority of people victimised by violence are male, but children and women are regarded as the most vulnerable, particularly those affected by sexual violence, women associated with armed groups who don’t receive reintegration assistance, and women with disabilities.