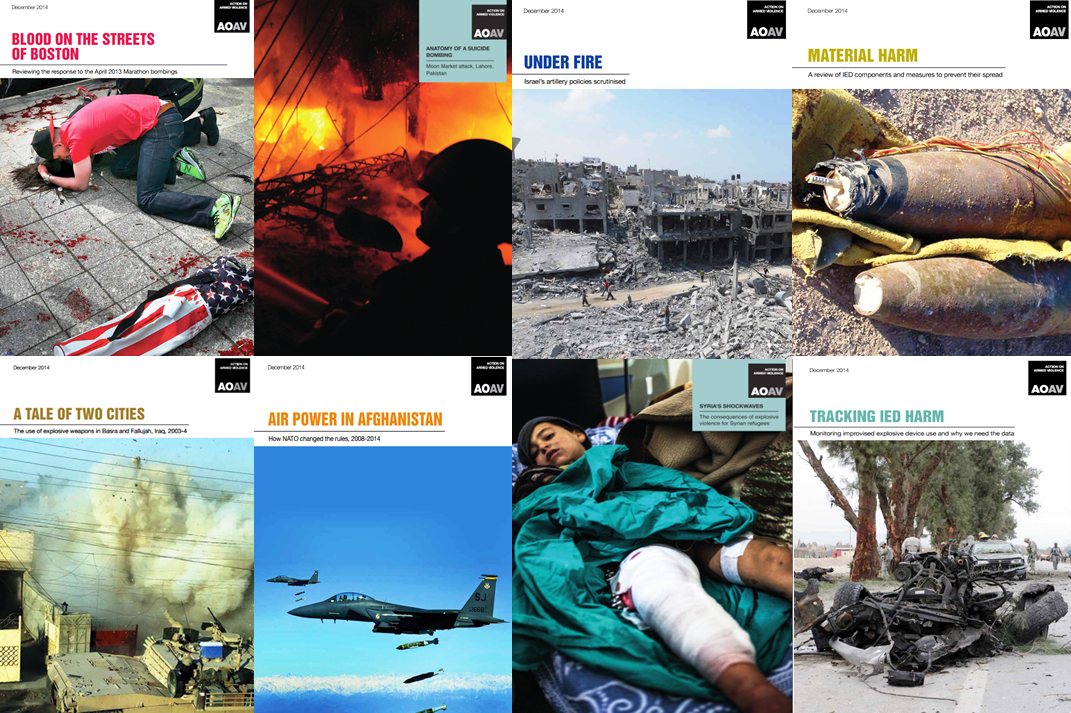 Under Fire  (March 2015) AOAV reveals how the changes made to the way Israel uses powerful artillery shells in Gaza has raised risks to civilians.

Air Power in Afghanistan (March 2015) AOAV shows how NATO had to change their air strikes rules between 2008-2014 in order to reduce civilian deaths in Afghanistan.

Material Harm (March 2015) How are IED materials sourced, and what are governments doing to stop this? AOAV examines the evidence.

A Tale of Two Cities (February 2015) AOAV investigates the contrasting use of explosive weapons in populated areas during the Iraq war by UK forces in Basra (2003) and by US forces in Fallujah (2004).

Blood on the streets of Boston (January 2015) AOAV visits Boston to review the response to the 2013 marathon bombings, and what assistance was provided to survivors.

Video: The global impact of explosive weapons (December 2014) This 90 second video shows the scale of recorded impacts between 2011-2013

Anatomy of a Suicide Bombing (May 2014) AOAV travels to Pakistan to investigate the long-term fallout from a suicide attack in Lahore’s Moon Market which killed 60 people in 2009.

Syria’s Shockwaves (May 2014) AOAV travelled to Lebanon’s eastern border to meet refugees who had escaped the devastating explosive violence in Syria.

Syria’s Dirty Dozen (September 2013) AOAV investigates twelve of the worst explosive weapons in Syria’s brutal civil war. Each weapon is profiled in its own short video and infographic.

Video: Syria’s Dirty Dozen (September 2013) Narrated by investigative journalist Ramita Navai, AOAV’s film exposes some of the most dangerous bombs, shells and rockets in use in Syria.

Wide of the mark (December 2012) AOAV explores the escalating use of explosive weapons in Syria in the first two years of fighting.