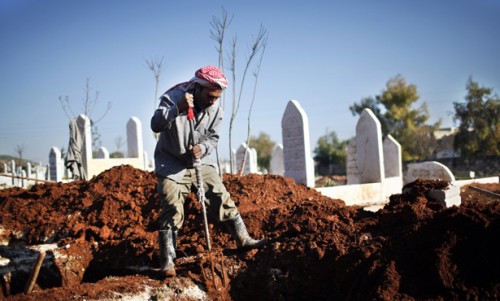 A man digs a grave for a casualty of Syria’s civil war.

Counting the cost of armed violence for people means quantifying its impact on civilians. Recording the numbers of civilians killed and injured is one of the best ways to do this.

To this end, AOAV aims to ensure that every country sees recording casualties as an obligation and a clear sign of accountability towards its citizens. Being properly recorded and identified is a basic right of every victim of armed violence and can help fulfilling other rights, such as access to healthcare.

Casualty recording can also be an effective way to prevent and reduce armed violence by providing hard evidence of the true impact of armed violence.

The evidence gathered by AOAV and partners informs targeted advocacy efforts towards an international obligation to record casualties.

In line with its programmatic approach, AOAV believes best practise requires both government and non-governmental institutions to engage with these reports. Such collaboration ensures that the reports maintain commitment beyond the political life of the government, generate a wider dialogue about the national response to armed violence, and help coordinate real-life responses to the problem.