Understanding the rising cult of the suicide bomber

Although suicide attacks have been carried out for hundreds of years, suicide bombings have only been a permanent feature of conflicts since the 1980s. In recent years, though, their use has dramatically escalated. AOAV, which collects data on explosive violence, has recorded a total of 1,191 suicide bombings globally between 2011 and 2015, resulting in 31,477 civilian deaths and injuries. 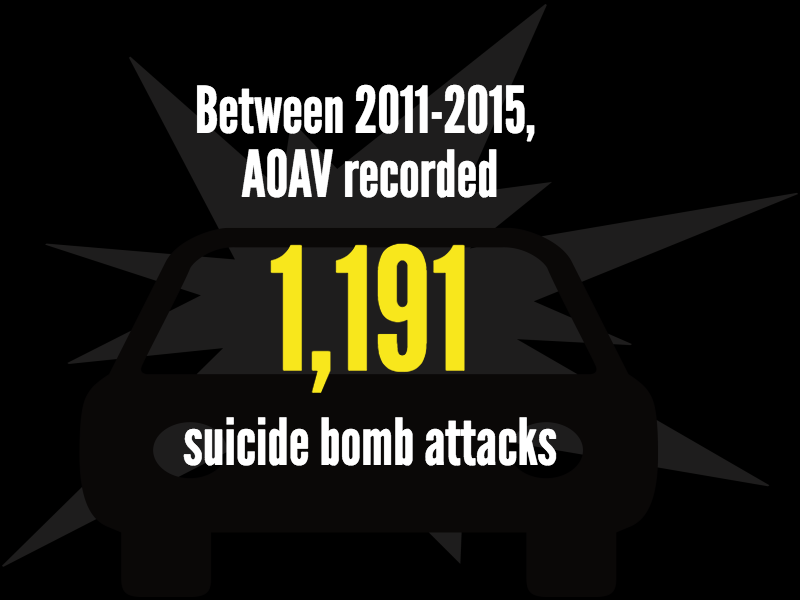 The vast majority of suicide bombings within these years have been carried out by international Salafi-Jihadi terrorist organisations.

In light of this, AOAV’s extensive report Understanding the rising cult of the suicide bomber investigates what makes individuals give their lives, and take others, for causes propagated by these transnational terrorist groups.

It also looks at what effect such attacks have had on local and regional conflicts, as well as on the communities exposed to them.

Furthermore, the report proposes how states and other actors in the international community might seek to prevent their use and further escalation based on the reports’ findings.

The report is based on extensive field-work, as well as a thorough mapping and investigation of specific suicide bombings and the individuals that perpetrated them.

Below you can find each section of the report in chronological order. To read the report as a whole, please click here.

A brief history of SIEDs

SIEDs as a strategic weapon

Suicide bombings and martyrdom in Islam

Spinning suicide: a look at IS media operations

Does the cult work? The wills of suicide bombers

SIEDs in the context of International Law

Appendix 4 – Suicide bombers from Europe (Others)

Appendix 7 – Transcripts of the wills of Syrian Suicide Bombers

Appendix 8 – Transcripts of the wills of Iraqi Suicide Bombers