AOAV was the first organization working to survey and clear landmines and cluster munitions east of the berm in Polisario-controlled Western Sahara. For over 7 years, AOAV worked with local Saharawi staff members to improve the safety of communities east of the berm by clearing over 26 million square meters of land and destroying over 22,000 dangerous items. Local communities and survivors of explosive remnants of war were at the centre of AOAV’s programme.

AOAV operations were carried out by 96 exceptional employees, 89 of whom were Saharawi.   They were trained to International Mine action Standards and received professional training in first aid, emergency trauma care, and administration and management procedures.

AOAV is committed to gender equality and has worked actively to encourage women to be part of mine action. As part of AOAV’s operations team, a majority women team was established, having women deminers, team leader and medic.

AOAV’s work in Western Sahara was supported by the United Nations, the Norwegian Royal Ministry of Foreign Affairs, the Diana, Princess of Wales Memorial Fund and the Federal Republic of Germany. Work was carried out in cooperation with Polisario and the Saharawi Association for the Victims of Mines (ASAVIM). 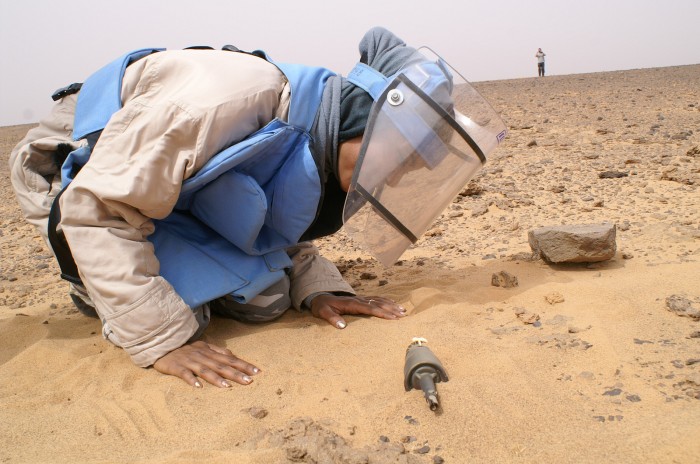 Throughout AOAV’s mine action operations, an Emergency Response Team provided 24/7 emergency response 365 days a year in case of mine/ERW-related accidents. This was often the only life-line for communities living in remote areas.

SMACO is now successfully taking a central role in supporting and coordinating mine action programmes in Polisario-controlled Western Sahara.

In 2012, AOAV partnered with the Saharawi Mine Victims Association (ASAVIM) to conduct a survey assessing the needs and aspirations of victims. Over 1,390 people injured by explosive remnants of war and their families were consulted, providing unprecedented and valuable insight into the issues that survivors care most about. Survivors were a driving force in shaping the process: they were members of the survey team and involved in outreach and building communities’ confidence.

As a result of the survey, AOAV together with its local partner, ASAVIM, established 48 survivor cooperatives consisting of 205 people injured by explosives remnants of war were given micro-grants. With these small start-up grants survivor cooperatives have been able to support themselves and their families through trade, livestock rearing and agricultural projects on land cleared by AOAV teams. These projects supported survivors to achieve economic independence, enhance social inclusion and improve survivors’ quality of life. 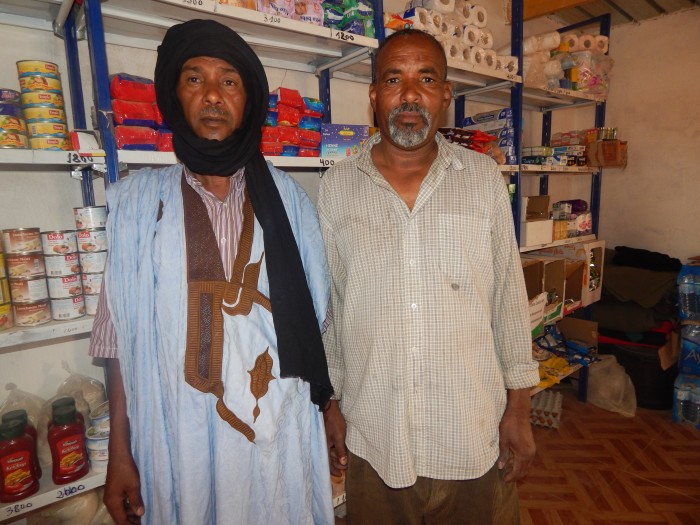 The people of Western Sahara continue to live with the threat of explosive remnants of war, such as cluster munitions, rockets and various types of landmines. Dangerous items do not only kill and injure, but they also prevent affected communities from earning a living in this harsh desert environment. Many mine fields, cluster strikes, and dangerous items are located perilously close to areas vital to the Sahrawi population, including wells and watering holes, grazing areas and transport routes. Children, who help their families with herding, are often those most at risk of death or injury as they follow their herds into dangerous areas.

It is estimated that over 2,500 people have been killed or injured in Polisario-controlled Western Sahara as a result of landmines, UXO and other ERW. Beyond direct death and physical injury, many individuals have suffered significant psychological trauma, mass displacement and impoverishment. These present major barriers to sustainable livelihoods, employment and socio-economic development.

More than 100,000 people are living in refugee camps in Algeria and have been living there for more than 35 years. They live in a state of limbo, unable to plan for the future and to return to their homes. Following Spain’s withdrawal as a colonial power in 1975, Morocco and Mauritania partitioned Western Sahara between themselves. This was met with an armed resistance by the Polisario Front, recognised by the UN since 1979 as the representative of the people of Western Sahara. Whilst Mauritania withdrew in 1979, Morocco and the Polisario Front continued fighting until a UN brokered cease fire was agreed in 1991.

During the conflict, Morocco built a thousand mile defensive wall, known as the “Berm”. This wall, which is the longest defensive structure in the world, divides the whole of the Western Sahara territory in two with Morocco controlling the area to the west and Polisario controlling the area to the east. The areas surrounding the Berm are believed to be some of the most heavily mined in the world.

In October 1975, Spain agreed to organise a referendum after the International Court of Justice recognised the Saharawi’s right to self-determination, but this did not take place. In April 1991, MINURSO (the United Nations Mission for a Referendum in Western Sahara) drew up a peace plan, which provided for a referendum the following year, giving Saharawis the choice between independence and integration with Morocco. To date, this referendum has not taken place.