At approximately 3 p.m. the gunman entered the law offices of Pettit & Martin at 101 California Street in San Francisco’s financial district. He wore earplugs and carried a TEC-DC9 pistol equipped with high-capacity magazines containing forty to fifty rounds of 9mm ammunition strapped across his chest. He also carried a handgun, for which he had ‘Black Talon’ hollow-point bullets.

He started shooting through the windows of a conference room, killing two lawyers, a witness, and a court reporter, before moving to other floors. Within minutes, the gunman had shot and killed eight people. Eventually, police cornered him in a stairwell where he committed suicide. Throughout the shooting spree, he fired between 75 and 100 rounds.

The semi-automatic firearms used by gunman were manufactured in Florida and sold in Nevada. The gunman purchased his firearms at a pawnshop and at a gun show in Nevada using an invalid Nevada license and a fake address. Under California state law, the semi-automatic Intractec TEC-DC9 model was specifically named as a banned assault weapon. 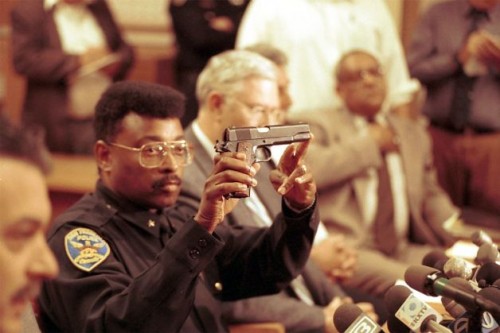 The law lists assault weapons as defined by Penal Code Section 30520, which includes a list of specific banned firearms, including the Intratec TEC-9 model used by the gunman. In addition, some weapons were banned due to their characteristics. For example a semi-automatic rifle that has the capacity to accept a detachable magazine; a magazine that accepts more than 10 rounds; a centrefire rifle that has an overall length of less than 30 inches, or any shotgun that has the ability to accept a detachable magazine.

The 101 California Street shooting  marked a significant turning point in the gun control movement. San Francisco Assistant Police Chief Earl Sanders, stated that, “the weapons Ferri had – Tec-9s – turned a 55-year-old, pudgy, out-of-shape little man into a killing machine.” Luis Tolley, Director of State Legislation for the Brady Campaign to Prevent Gun Violence stated that in the aftermath of the shooting, “a tenure of real activism and change” took place.

Increased national public awareness sparked real legislative change when California Senator Dianne Feinstein drew up the Federal Assault Weapons Ban the following year, which was modelled on California’s ban. While the state legislation in California was widely regarded as a ‘quick fix’ after the Stockton school massacre without the substance to force real change, the Federal Assault Weapon ban was seen as a piece of historic gun reform legislation.  President Bill Clinton signed the bill on 13 September 1994.

Enacted under Title XI as a subsection of the Violent Crime Control and Law Enforcement Act of 1994, the Federal Assault Weapon Ban prohibited the manufacture, transfer, or possession of nineteen listed semiautomatic assault weapons and approximately 200 firearms covered by the law’s generic definition of ‘assault weapon’[1].  Legally speaking, firearms are defined as ‘assault weapons’ if they possess certain features. Among these characteristics are a compact design, a barrel of less than 20 inches, a pistol grip, a folding or telescoping grip, and the ability to receive large-capacity ammunition magazines[2]. Congress agreed that these characteristics differentiated a military-style from civilian-style weapons, which could be used in hunting and target shooting, as well as in self-defence. The ban was passed for an initial period of ten years, but in 2004 Congress failed to renew it and the law expired.

California, at the state level, repealed a statute that had given gun manufacturers immunity against lawsuits after an attempt by some relatives of the victims to hold the companies that manufactured the pistol TEC-DC9, that the gunman used in the shooting, liable for negligence in Merrill v. Navegar.