The problem with explosive weapons

They wouldn’t have seen it coming. On 3 September last year a bomb crashed through the roof of the Hajju house in the Syrian city of Aleppo, wiping-out an entire family as they slept in their beds. Eight children were among the dead that day. It was just one of countless incidents where explosive weapons have killed and injured unsuspecting, unprotected civilians in Syria.

By even the most cautious estimates, explosive weapons have killed and injured tens of thousands of people in Syria. They are thought to be responsible for about 40% of deaths in the conflict.

Crucially, civilians are overwhelmingly the victims of this group of deadly weapons, which includes rockets, mortars, tank shells, and air-dropped bombs. In Syria, more than 90% of the casualties of explosive weapons have been civilians.

And while the horrifying effects of chemical weapons have been dominating headlines in the last month, rockets, mortars and artillery are continuing to kill more and more people on daily basis. Just last week, 11 people died when a plane fired missiles into a field hospital in northern Aleppo province.

In this investigation, AOAV shines a spotlight on twelve of the worst of these weapons in Syria.

Syria’s Dirty Dozen, narrated by investigative journalist Ramita Navai, an award-winning journalist who reports for Channel 4’s Unreported World, exposes some of the biggest and most dangerous bombs, shells, and rockets in the country, weapons whose wide-area effect are tearing apart the lives of so many civilians.

What are the Dirty Dozen?

Syria’s Dirty Dozen is AOAV’s profile of twelve of the worst explosive weapons in use in Syria. There are no chemical or incendiary weapons in this Dirty Dozen, nor is this some more general list of the ‘deadliest’ weapons in Syria. But every weapon profiled here has a reason to be featured, like the M240 mortar bomb—which is the biggest mortar in the world. Weighing the same as an upright piano, the M240 shocked the world when it was used as part of the bombardment of Homs in February 2012.

The Syrian arsenal at the start of this war was one of the biggest in the Middle East. In the three years before fighting broke out, the world agreed more than $5bn in arms sales with the Assad regime. Russia is by far the largest supplier and in 2011 sold a tenth of its entire arms exports to Syria. In selecting twelve of the worst and most destructive weapons, there is no shortage of deadly bombs from which to choose.

To find the Dirty Dozen, AOAV enlisted the help of weapon-spotter and Syria analyst Brown Moses, who has trawled through countless videos from the country’s urban battlefields since the crackdown on protests first began in 2011. The footage he has found show how these weapons are being used, and some of the impacts they have had on civilians. 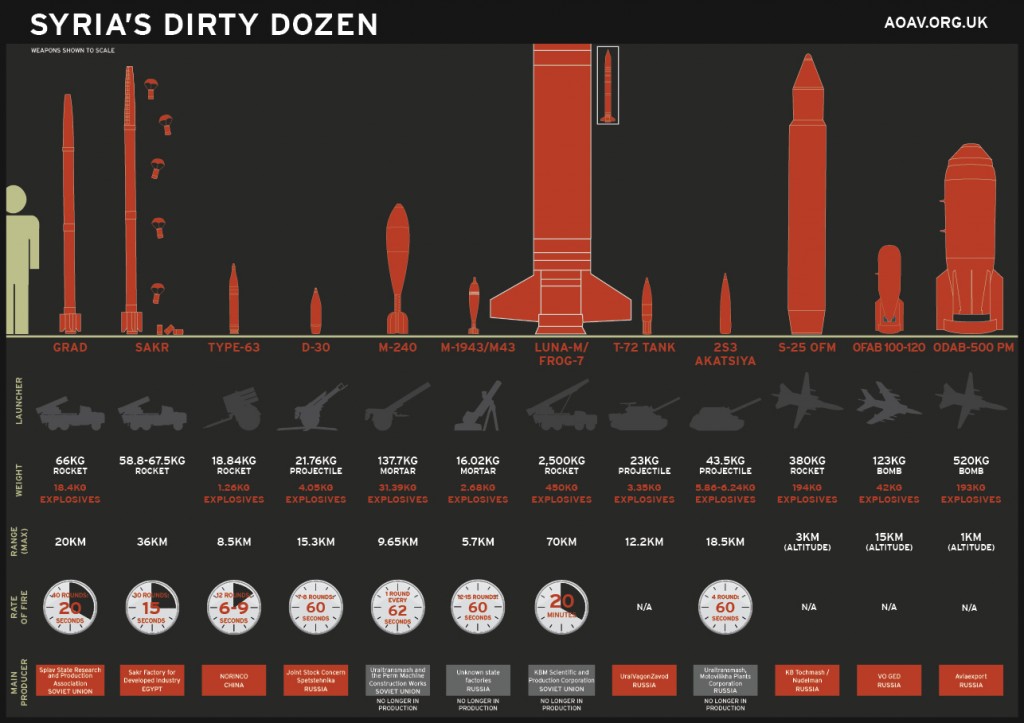 Some may be all three, like the notorious BM-21 Grad rocket which is designed to blanket an entire area with high explosives. The system can fire 40 unguided rockets in less than 20 seconds. It is an inherently indiscriminate weapon.

More than 50 countries own the Grad, making it by far the most popular rocket launcher in the world. It is one of two multiple-rocket launchers that were in the Syrian military’s arsenal when war broke out. The other is the Chinese-made Type-63. The Type-63 is a smaller system than the Grad. But it still has a devastating impact. In the first two years of fighting in Syria AOAV recorded an average of 12 civilian deaths from every incident of rocket fire.

Two other rockets feature in the Dirty Dozen. The Frog-7 has been selected to represent the varied Scud-like missiles that have been brought into play in recent months in the conflict. Weighing over 2,500kg, these rockets have the power to blast whole neighbourhoods out of existence.

The Egyptian Sakr rockets are unique as the only ground-launched cluster bomb in Syria. As the Sakr flies through the air it unleashes as many as 100 explosive submunitions, which scatter across an extremely wide area. Cluster bombs are rightly banned by international law and the use of these prohibited weapons in Syria caused global outcry.

Many of the Dirty Dozen are headline weapons, whose deployment sparked global concern because they marked a new escalation and yet another show of disregard for civilian safety.

The use of air-dropped weapons is a case in point. They were first recorded in July last year, and they were rightly seen as posing a calamitous new threat to the civilians on the ground. Three air-launched explosive weapons feature in the Dirty Dozen. These are a classic ‘dumb-bomb’, the OFAB 100-120, the thermobaric ODAB 500 PM and the S-25 rocket, which was only seen in Syria this summer.

A large number of different bombs, shells, and rockets have been used in Syria. Therefore, many weapon types don’t make the list, like grenades or anti-tank missiles. AOAV has instead focused on the explosive weapons that have a particularly wide-area effect, as these are proving to be of the greatest humanitarian concern. Massive artillery shells, fired by weapons such as the 2S3 Akatsiya and the D-30 have resulted in thousands of civilian casualties. Tanks like the T-72 cause an average of 16 civilian casualties when they fire shells in Syria’s towns and cities. The tank shell that features in Syria’s Dirty Dozen is capable of killing or injuring anyone in an area the size of Trafalgar Square in central London.

In addition, improvised bombs don’t feature in the list, despite the many attacks carried out with IEDs. The list is focused on manufactured ordnance, but it’s worth noting that nearly all of these weapons are now used by rebel groups as well as regime forces. In fact, because of the far greater transparency and self-promotion of the rebels, much of the footage collected shows opposition fighters using these weapons. Heavy mortars, like the M-1943, are one of the most commonly-used explosive weapons in the conflict. Both state and non-state actors make regular use of mortars, and more than 94% of the time they are being fired in areas where civilians are at threat, including schools and displacement camps.

A time to change

Many of the weapons in AOAV’s Dirty Dozen are still in production. Some are old, old weapons, made in the heart of the Cold War. But their lifespans are long. They can still crash through the roof or wall of a sleeping family and tear their lives apart.

And while Syria is the logical focus of this research, there are many explosive weapons that are similar or even worse in the arsenals of other states. Without much tighter controls and vital changes to the behaviour of weapon users, these weapons could create further tragic headlines.

In London on 23-24 September, governments, UN agencies, and experts from the field are coming together to discuss the humanitarian impact of explosive weapons in populated areas. It is the first meeting of its kind, and is a chance to chart a way forwards.

The release of the Dirty Dozen is timed to coincide with this meeting. AOAV wants to see strong new international standards that better restrict the use of explosive weapons in populated areas. AOAV hopes that this marks the start of renewed efforts to improve the protection of civilians from explosive weapons, and to learn the terrible lessons from Syria.

Action on Armed Violence is a founding member of the International Network on Explosive Weapons (INEW), a coalition of NGOs that includes Human Rights Watch and Save the Children.