Every soldier’s death is a tragedy for someone.  For their family and their friends.  For those that served beside them, and for those that supported their fight.  In many regards, each death should be remembered as such a singular tragedy – a sacrifice of a life in the perceived pursuit of a greater good.

But, in some respects, the veneration that such a death often engenders means that the way soldiers die is frequently under-examined. A statistical review of the fatality records of a conflict can be seen as callous or cruel. However, not to analyse the ways that soldiers die in modern conflict means that our understanding of such conflict is reduced, and the threats that 21st Century war engenders may be misunderstood.

To address this, Action on Armed Violence (AOAV), examined the deaths of 635 military personnel fighting for the British Army between 09/04/2002 and 23/07/2015, to better understand the toll of the so-called ‘War on Terror’. Of these men and women, 179 died in Iraq (or in staging posts such as the Gulf States and Cyprus), and 456 died in Afghanistan. The most fatal year for British forces in Afghanistan was 2009. In Iraq it was 2003. 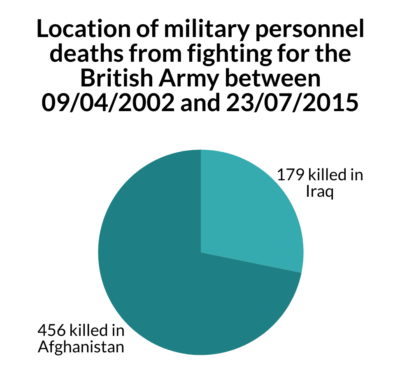 The statistics presented here are from an analysis of announcements posted on the British Ministry of Deference’s website, along with subsequent inquests, where the means of deaths of British Forces in Iraq and Afghanistan are listed.

In total, 55% of all serving personnel (347) were intentionally killed by explosive devices, out of a total of 635 deaths. This category is inclusive of weapons such as IEDs, grenades, missiles etc. 26% (164) members of the British armed forces were intentionally killed by gunshot – the second largest category of fatality. Non-hostile action accounted for 104 deaths or 16%, including accidents, natural causes and suicides. Friendly fire made up 3% of all deaths, with 20 service men or women dying in this way. 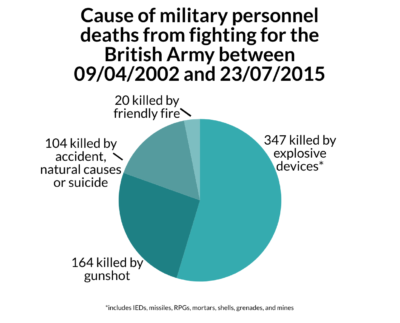 These broad trends remain the same when breaking down the data to analyse Iraq and Afghanistan individually. 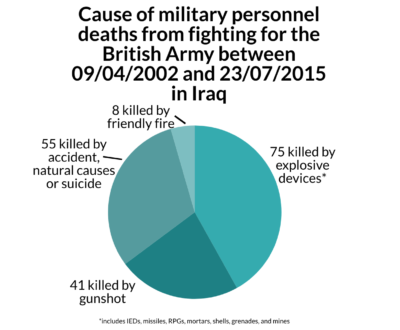 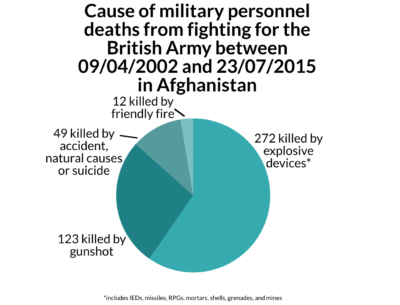 Analysing the statistics, with specific regard to explosive devices, the most fatal explosive device for both Iraq and Afghanistan was the Improvised Explosive Device (IED), responsible for 28% and 51% of deaths respectively. This IED devastation is representative of the wider continued global usage of these devices and the fatal impact of such weapons.

Investigating the use of explosive devices on British service men and women in Iraq, aside from IEDs, they accounted for 14% (24) of all fatalities. Of these, missiles comprised the largest proportion causing 8% (15) of all deaths. Rocket-propelled grenades caused 3% (5), and mortars accounted for 2% (3).  Lastly, shelling made up 1% (1).

Iraq explosive devices examined (from a total of 179 deaths)

For Afghanistan, IEDs made up a larger proportion of deaths. Other explosive methods only represent 9% of total deaths. Both anti-personnel mines and rocket propelled grenades caused 3% (12) of fatalities. Mortar represented 2% (7) of deaths, and grenades caused 1% (6). There was 1 death by anti-vehicle mine and 1 by missile in Afghanistan, both totalling less than 1% of total fatalities.

Afghanistan explosive devices examined (from a total of 456 deaths) 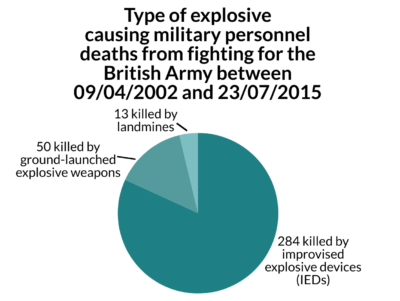 In terms of location of the fatalities, in Iraq, Basra was the site of the most deaths at 49% (88) and Baghdad the second largest area of fatalities at 11% (20). There were 18 other recorded location of fatalities in Iraq – totalling some 20 named locations overall. Explosive devices made up the majority of deaths in Basra and Baghdad at 51% (44) and 65% (13) of the total killed in those cities, respectively.

The location of fatalities was more widely dispersed in Afghanistan. The Sangin region of Afghanistan accounted for the most deaths at 23% (105), but there were 42 other named areas that witnessed fatalities. Explosive devices caused 70% (74) of the deaths in Sangin.

Overall, the analysis of the means of deaths of British forces in both Iraq and Afghanistan has highlighted the prevalence of explosive devices as the main cause of fatality in modern British conflict.  Specifically, IEDs have taken the most lives of British service men and women both in towns and cities, in Iraq and Afghanistan.  From suicide bombers to roadside bombs, the IED is the deadliest form of weaponry the modern British soldier faces today.